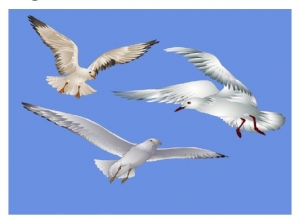 Spiraling above a fishing boat or squabbling at a dock or parking lot, Herring Gulls are the quintessential gray-and-white, pink-legged “seagulls.” Also frequenting the south-east of the United States are the ring-billed gull and the laughing gull.

Herring Gulls are large gulls with hefty bills and robust bodies. In flight, they look barrel-chested and broad-winged compared to smaller species such as Ring-billed Gulls. Adults have light-gray backs, black wingtips, and white heads and underparts. In winter, dusky streaks mark their heads. Herring Gulls take four years to reach adult plumage. Juveniles are mottled brown; second-year birds are brown but show gray on the back. Third-years have more gray on the back and more white on the head and underparts. The legs are dull pink at all ages. They are about 22 to 26 inches in size (55-66 cm), with a weight of about 28 to 44 oz (800-1250 g). Their wingspan ranges from 54 to 58 inches (137-146 cm).

Herring Gulls’ scavenging habits take them to open water, inter-tidal pools and shallows, mud flats, landfills, newly plowed fields, picnic grounds, and fish-processing plants. They roost in large mixed species groups, in open areas with good visibility for spotting predators, including fields, beaches, parking lots, airport runways, and garbage dumps. They breed near lakes in northern forests across Canada to Alaska and in some coastal areas. Colonies often form on isolated islands, barrier beaches, and marshy hummocks, which are safe from terrestrial predators (though aerial predators can still be a danger).

Herring Gulls prey on marine invertebrates, fish, insects, smaller seabirds, and even on adults, young, and eggs of other gulls. Along rocky shores, they take mussels, crabs, sea urchins, and crayfish. On mudflats, they seek worms, small clams, and mussels. In open water, they follow large predators (including fishing boats) that bring small fish, squid, and zooplankton to the surface. Newly plowed fields provide ready supplies of earthworms and other invertebrate prey. Herring Gulls are opportunistic scavengers on fish, carrion, and trash. Individual gulls often specialize on a food type. Most choose marine invertebrates like crabs, sea urchins, or clams, even though fresh-caught fish make their most calorie-, protein-, and fat-rich meals by far. In spite of this apparently poor choice, these gulls have the largest, heaviest eggs and the highest hatching success rates. The opportunism of gulls extends to raiding nests of other seabirds, and one or two males per large breeding colony may even specialize in cannibalizing chicks of others in the colony.

Herring Gull pairs pick nesting sites together in the soft soil, sand, or short vegetation of their territory. To protect against prevailing winds and predators, the nest is usually placed next to a rock, log, or bush. This also hides it from the nearest neighbors. Crevices may be used as nest sites in rocky areas. Several days before egg-laying, pairs hollow out up to four depressions 10–15 inches across with central depressions 4–8 inches wide and about the depth of an egg. They line the scrapes with vegetation, feathers, plastic, rope, or other materials. The pair chooses the final nest from these alternates. After the female lays her eggs, the pair continues to add vegetation to this nest throughout the month-long incubation. Sand nests are sometimes left unlined or only sparsely lined. Clutch size is 1-3 eggs. Incubation period is around 31-32 days. At the time of hatching, the chicks eyes are open, and the body is covered in thick gray down with black spots.

Herring Gulls patrol shorelines and open ocean in widely scattered groups, soaring raptor-like and spiraling down to pick scraps off the surface. Individuals plunge-dive from near the surface and dip while paddling to take shallow prey. Rallying around fishing boats or refuse dumps, they are raucous and competitive, threatening and stealing from other birds. They’ll prowl tide flats seeking out invertebrates, gobbling small items whole, picking apart larger prey, and dropping
shellfish onto rocks to break them open. Tighter groups follow foraging whales, groups of dolphins, or schools of large fish in open water, hovering to nab small prey driven to the surface. Their opportunistic scavenging punctuates hours of bathing, preening, and “loafing” near food sources. (“Loafing” is a term behaviorists use to describe a bird that isn’t doing much of anything; many seabirds spend long hours this way.) Males establish breeding territories and both members of a bonded pair defend it with threatening postures, warning calls, and chase-attacks in air and on ground. Courtship rituals include mate-feeding, and pairs remain bonded as long as both live. They return to the same territories each breeding season and share the work through a month of incubation and three months of chick-raising. One parent is always at the nest until the chicks are at least a month old.

Herring Gull populations declined by over 3.5% per year between 1966 and 2015, resulting in a cumulative decline of 83%, according to the North American Breeding Bird Survey. The North American Waterbird Conservation Plan estimates a continental population of over 246,000 breeding birds and lists it as a Species of Low Concern. The species rates an 11 out of 20 on the Continental Concern Score. Herring Gull is not on the 2016 State of North America’s Birds Watch List, but the 2014 State of the Birds Report listed it as a Common Bird in Steep Decline. Human activities are the main threats to local populations. For example, Atlantic Coast populations were nearly wiped out in the late 1880s by hunters seeking feathers and eggs. But by the 1980s, their numbers had increased tenfold to more than 100,000 pairs. Conservation movements ended exploitation in many areas, though numbers had shrunk to a degree that hunting became unprofitable anyway. Other changes inadvertently aided recovering populations. Increasing numbers of coastal fishing boats in the 1930s dumped “garbage fish” and waste, providing a rich new food source. The growing number of onshore refuse dumps also attracted gulls but probably had mixed effects, since chicks fed on human refuse show poorer survival rates. Whaling, the destruction of dolphin and porpoise populations, and intensive fishing of larger fish like cod and salmon decreased competition for the smaller fish that gulls favor. More recently, however, continued overfishing has made even these smaller fish less numerous. And changing fishing practices have meant less waste from fishing boats. Oil pollution, pesticide contamination, and deliberate control measures have threatened some Herring
Gull populations.

ACKNOWLEDGMENTS: The information contained in this document was gathered from various, publicly available sources, including Audubon and the Cornell Lab of Ornithology.